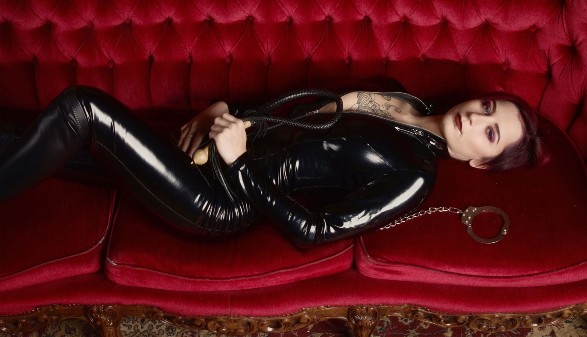 Enjoying sex in a public place. Fear of getting caught is the real turn-on!

Effectively rape-play or rape fantasies (both parties must have previously agreed on boundaries, CNC should never be spontaneous.)

Inserting water or other liquids into orifices and ejected, for the purpose of cleansing and/or sensory pleasure.

A popular fetish and fantasy of performing sexually in front of others.

Peeling and shaping a piece of root ginger which is then inserted into the anus or vagina. The burning sensation heightens arousal.

A form of bondage equipment worn over the mouth to prevent speech, usually a ball gag. Often for humiliation used in dom sub dynamics.

Also known as forniphilia. The enjoyment of being used as a piece of furniture, for example, a footstool, chair or table.

A thrill from being locked in a cage, cell, wardrobe? Perhaps your inner vampire is unleashed when someone opens your coffin...

Animal role play where the consenting fetishist takes on the role of a kitten. Accessories used may include ears, tail plugs and collars to enhance the fantasy.

A popular role-play scenario of nurse/doctor and patient. This extreme play uses equipment such as catheters and speculums.

A Japanese form of massage where both participants are naked. The masseuse rubs their naked body over the other with the aid of specially formulated massage gel.

Denying a partner’s orgasm for mutual sexual gratification. This could be through obeying and submitting to a dom or dominatrix’s commands or with a physical aid such as a chastity device.

A specific fetish for hands. The attraction could be part specific such as fingernails or simply hands performing actions such as washing.

This could include biting, scratching or power play in dom sub-roles.

Or Scat play is an extreme fetish for human faeces.

Fetishes and fantasies involving uniforms to be worn by either the fetishist or their sexual partner.

A kink for watching other people have sex.

Intense attraction towards people from other cultures or strangers.

Sexual intercourse between furries (people with an interest in anthropomorphized animals).

Register for
Subs And Doms
1
2
3
4
5
By clicking Submit, you are agreeing to the terms of use.
< Next
Previous >